Penny (known only to the AKC, CKC and Nick Broadbridge - what was he thinking? - as Sallen Portia) rocketed out of an airline crate which carried her from Scotland in 1996, began ricocheting around the room and hasn't slowed down much since.
A beautiful very old style brown and white who still managed to win a Best Puppy in Show while waiting to get on with her true passion --Sheep!
I can still remember when at 4 months, she first met sheep. She didn't show instinct, she showed full blown herding. She lifted them from the fence, kept them out of the corners and kept bringing them back to a little group in the center of the pen.
You'd never forget watching a little 4 month old barking and jumping up and down stiff legged as she drove challenging ewes twice her height back into the flock.
And you wonder why I call her my little Highland Warrior Princess? I keep looking at the battle scenes from Braveheart. I know that sooner or later I'll spot my little Penny running wildly down a hill barking Gaelic curses at the top of her voice while swinging a great big Claymore over her head. Scots, Wha Hae!

Sadly Penny passed away Oct 26, 2010 in her sleep.  She died like she did everthing on her own terms.  She was almost 15 but should have lasted years longer.  Her spirit  and love of life we could write books about  and yet there aren't words enough to descibe her.
If you knew her you would understand and if you didn't know her there aren't enough words to describe her 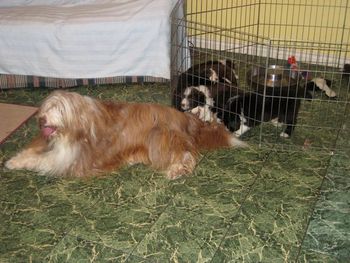 You won't get me looking after those little rug rats. I've done my time, get someone else to entertain them.