And then there's Autumn, our "Pageant Princess", winner of her American championship in 3 weekends and the fastest tongue in the west.

That last little title may require some explanation. Autumn is Carrie's first child and our first puppy. Now you have to understand that Carrie loves her puppies. In Marsha's extensive reading before Carrie's (and our ) first whelping it was stated that you had to dry off each puppy and keep them warm while mom was delivering the next one.

Well, when the fateful day arrived we ( Marsha , Carrie and I) were relaxing on top of our king sized bed when Carrie started getting all funny and fidgety. Marsha went to check Carrie's nether regions and low and behold Carrie deposited the first of her many wonderful little offspring into Marsha's unsuspecting hands. This has resulted in a very special bond between Marsha and Autumn which I am sure will last as long as they both shall live.

The awkward part of this whole birthing experience was that Carrie would not allow Marsha to dry Autumn and cover her with a blanket. Carrie singlemindedly refused to to do anything but lick her first born continuously for over an hour until the next puppy made his entrance.We were seriously beginning to have concerns for Autumn's health let alone whether there would be any colour left on Autumn's coat or whether Mom was going to lick it all off.

To this day, Autumn considers licking to be the physical manifestation of love. Given the slightest opportunity, expect Autumn to plant a big sloppy one right on your cheek. When she was younger and at shows while up on the grooming table getting prepped for the ring you could watch her ever so slowly lean toward the aisle and the unsuspecting folks coming to see the dogs. With the lightning tongue speed that would put a frog catching a fly to shame, Autumn had said "I love you" to another startled bystander.

Autumn will be 16 years old in March and still loves the spotlight and attention as seen this summer when she was the oldest beardie in the ring at the Canadian National Speciality.  She may not have moved with the grace she once had, her coat might have been a little lighter and thinner but in her mind she was the Princess with all her subjects admiring her once again.

It is with great sadness that we annouce the loss of our Autumn April 9, 2010.  The 1st of April I though she might be with us another year or even  two but God decided that we had had her long enough and it was his turn.  We have lost a bit of our heart but know we will be with her again at the Rainbow Bridge. 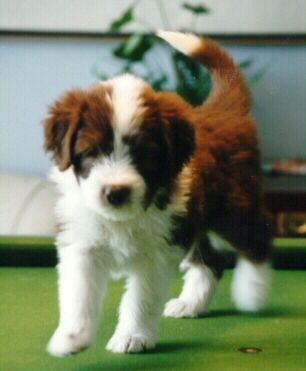 Autum at 8 wks old. At this age a beardie is as dark as they will ever be 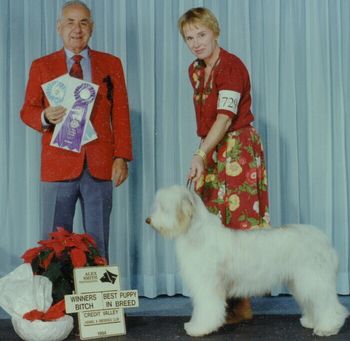 Lory Ross and Autum at 8 months. Notice how white she is at this age 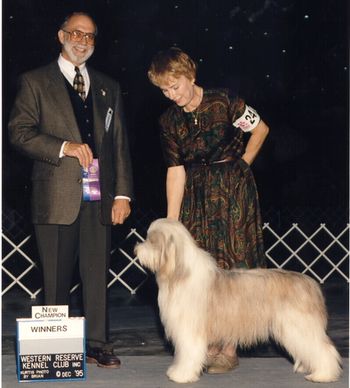 Autumn and Lory winning her US title at 18 months old. See her adult colour coming in 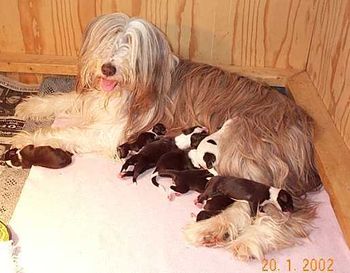 Autumn took to motherhood like she took to the ring. We call her Earth Mother 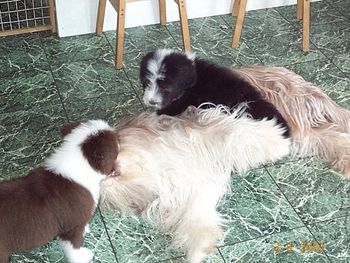 Autumn playing with her babies 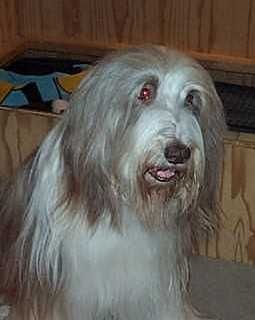 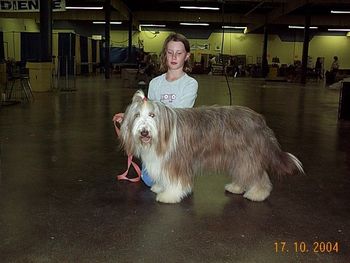 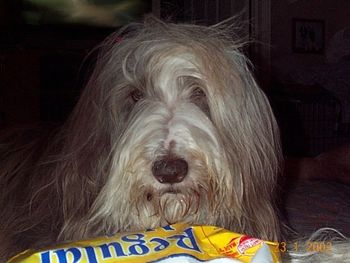 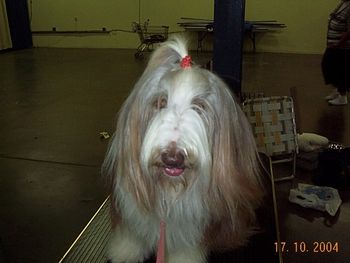